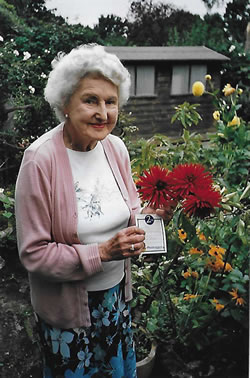 Mrs Jacqueline Dyde and her late husband Freddie moved to Perivale Gardens in 1959. Having grown up in Cornwall, Jacqueline was already an enthusiastic gardener and her husband was equally keen if somewhat less experienced. Living so close to the site, they decided to approach the manager about renting a plot. This proved far from easy. It quickly became apparent that the manager at the time ran the site as a personal fiefdom and had very specific ideas about the kind of people he wanted as members of his empire. Certainly, a young woman was not going to conform to his idea of a serious gardener.

There were at the time many empty, overgrown plots crying out for cultivation but this made no difference to this man’s prejudices. It was only the intervention of a more acceptable male figure that finally gave the young couple access and the chance to tackle one of the very worst of the wild plots in the nether regions of the site. Jacqueline vividly recalls the bird’s nest in the gooseberry bush and a spinach plant the size of The Eiffel Tower. They gamely laboured on this plot over several years until a change of Manager in 1965 gave them the chance to acquire 3 new plots .There then ensued several decades of happy and productive gardening with one plot being devoted to potatoes, another to traditional vegetables and soft fruits, and the third to Jacqueline’s special enthusiasm – flowers and tomatoes.

Jacqueline recalls that in those decades of 60s and 70s, the site was dominated by men. Women, in the form of wives, came on site merely to pick produce and take it back to the kitchen. This gender delineation was very evident in the annual produce show … a large event held every September in North Ealing School and with large silver cups fiercely competed over. Men produced the vegetables and women the jams, cakes and embroidery.
Sadly, Freddy became ill with cancer and, although he survived for several more years, his declining health forced them to give up two of their beloved plots. Jacqueline described how hard it was to relinquish such a large part of the shared lives and labours.

Jacqueline, now 94, gave up their remaining plot in 2013 having continued to work it for a number of years after Freddie’s death. She kept meticulous records of her planting and harvesting throughout her membership. She is delighted that her granddaughter’s husband is also a keen allotment tenant and keeps an immaculate plot over in Forest Gate.

Jacqueline’s lively longevity is shared by her pet tortoise, Joseph, who must be at least 80 years old and going strong. He hibernates under a shed in the garden and Freddie used to say how he would “hear the rustle of Spring” as Joseph emerged from under his blanket of dried leaves every April.