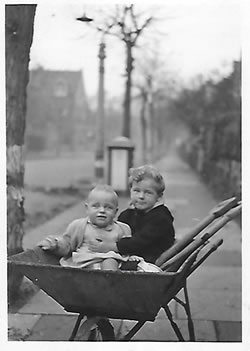 At 72, Melvyn Buck is the third generation of his family to have a close connection to Pitshanger Allotments. In 1928, eleven years after the opening of the allotments, Ernest Bieri a Swiss émigré and trained patissier made his home in Ealing and acquired his first plots. Thus began the 64 year association of this family with our site. Ernest’s daughter, Dorothea Joan, married Leslie Buck in 1940 and they moved to Meadvale Road where their son Melvyn still lives. Leslie and his father-in-law Ernest, a keen alpine plant specialist and regular winner of Ealing in Bloom, gardened together through the war years and, at this time, had 2 plots within our current site and a further 2 outside in what is now Pitshanger Park. Melvyn vividly described how the whole of the Park apart from the tennis courts, the putting green and the children’s playground was intensively cultivated under the Dig for Victory scheme.

Two Mayors of Ealing during this period, Mr Gooderham and Mrs Lorde, had plots there. In those days, the forties and fifties, the allotments were run by a committee primarily made up of local “worthies” whom Melvyn described as being like Colonel Mannering – doing their bit to keep the flag flying during the difficult war years.

In the 60s a different kind of person took over the management role, noticeably those with more obvious gardening experience and background and who were motivated more by this personal interest than by a general sense of civic and patriotic duty.

When the war ended and rationing was phased out as food became more readily available, many of these “park” allotments became derelict and rampant. Over a period of 15 years, the Council gradually took over the park area for its original leisure purpose. Melvyn records that this process was not without controversy.

It was in the 1950s that the young Melvyn, under the tutelage of his grandfather and father, became progressively involved not only cultivating his own part of the three plots they rented (nos 80, 81 and 82) but also by attending committee meetings. His father held positions on the committee at various times up until his death in 1984. Throughout his teenage years, Melvyn also helped out every Saturday in the Trading Hut which was run enthusiastically by Mr Tracey. Melvyn recalls the shows held annually in North Ealing School and at which he and his father won many prizes and cups.

After the death of his mother in 1989, Melvyn found he had no one to process his produce and reluctantly decided to give up his plots in 1992. He was delighted to be asked to contribute to the research for a play at Questors Theatre based on allotments a few years ago.